UPDATE: Tanushri recently won a LG G Watch watch in PyCon 2015 (thanks to Google), so we have a watch to start implementing the smartwatch feature. The app will now be free on Google Play as well, as we don’t need money anymore 🙂

I had recently bought a smart-watch (SmartQ Z) and as mentioned in some of my previous posts, I started playing around and creating my own watch-faces. One fine day, I got an idea to put my contact details on the watch screen as a widget showing a QR code (with my vCard encoded) so that if someone asks me for my details, I could just flash my wrist and they could scan and save my contact info. Geek lvl over 9999.

So, I spent some a few evenings with a friend, re-inventing the wheel and created first my QR Code generation app. It was mostly an Android revision for us with some UX/UI brainstorming done now and then. The goal was to make it simple. Very simple. And clean. With just the necessary customizations given to the user. This is how it looks till now: 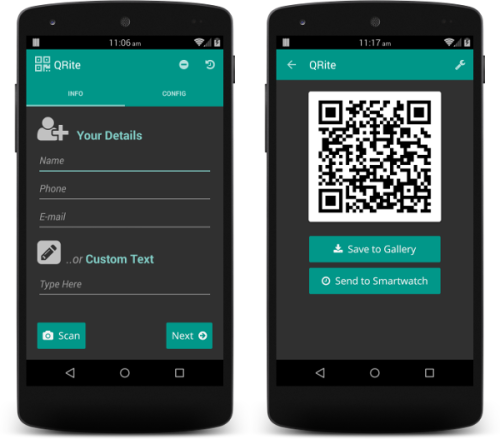 You can check out the beta attempt, get some more details and screenshots here : http://qrite.suchakra.in/ Its an open source app and if you want to use it or want to contribute to the source code, head over to this Github repo. The source is not so rosy and glorious considering I just focused on functionality and gave exactly 0 about anything else

It needs some cleanup for sure and it is indeed the next step.

So there are some features already available as configuring color, size and recent contact details for which QR code was generated. And some features are to be added, such as digitizing an already available QR code using your camera and ‘scanning’. The major feature, “Send to Smartwatch” is also left. The plans are to support Android Wear, Pebble and generic android (such as SmartQ Z) platforms. However, I don’t have Android Wear/Pebble for which this could be most useful. If you want to donate a Android Wear or Pebble (if you have one extra) or some money for me to get those, or if you just want to support open source development, you can consider buying the app from this Play Store link (it will be made free as soon as all features are completed). You can also send a donation by clicking

Just FYI, my goal is approx USD $130 (price of cheapest LG W100 watch). Feedback and suggestions for the app are welcome.